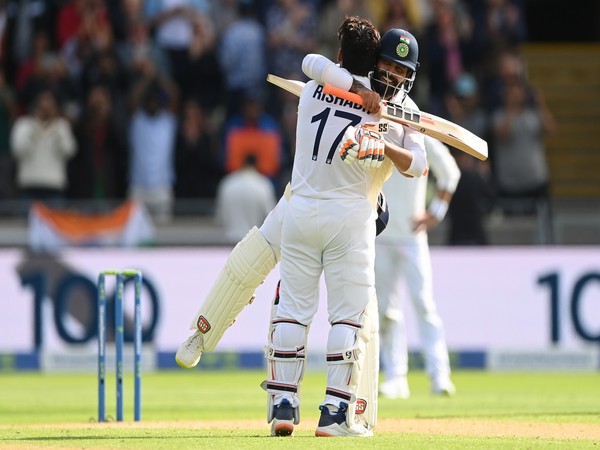 Birmingham [UK], July 2 (ANI): Rishabh Pant and Ravindra Jadeja on Friday added a mammoth 222-run partnership stand for the sixth wicket against England on the first day of the fifth rescheduled Test at the Edgbaston cricket ground.
The record partnership of 222 runs in 239 balls was shared between the two for the sixth wicket, which was the highest partnership by an Indian team in England. This was also India’s joint fourth-highest partnership in Test cricket.
The duo equalled Sachin Tendulkar and Mohammad Azharuddin’s record which they set in 1997 against South Africa in Cape Town.
The Indian team scored 338 for 7 on the first day of the fifth and final Test match against England at Edgbaston, which started on Friday. At one point, Team India lost 5 wickets for 98 runs after a poor start. The duo of Jadeja and Pant batted with a bang and took Team India past 300 runs.
Pant played a superb inning of 146 runs in 111 balls and scored his fifth century in Test cricket. At the same time, Jadeja played an unbeaten 83 in 163 balls.
The partnership came to an end after Pant was removed by former captain Joe Root. At the time of leaving the pitch, Pant had smashed 146 runs off just 111 deliveries.
The knock totally transformed the face of the game as India went on to dominate the second and third sessions. After Pant’s depature England were able to remove Shardul Thakur as well, providing them with some control of the game at the end of day one.
India will start the second day of the fifth Test match with 338/7 on board with Jadeja and Mohammad Shami batting at the crease. (ANI)