Ahmedabad (Gujarat) [India], March 2 (ANI): A day after training in the nets, the Indian cricket team on Tuesday shifted focus to fielding to ensure utmost sharpness in the upcoming fourth and final Test against England, having taken a 2-1 lead in the series.
While batsman Mayank Agarwal was seen taking a diving catch, all-rounder Washington Sundar was seen throwing the ball back seconds after collecting it at the Narendra Modi Stadium.
Spinner Kuldeep Yadav and pacer Umesh Yadav also took part in the fielding drill ahead of the fourth Test. The Board of Control for Cricket (BCCI) in India shared the glimpse from the fielding session. 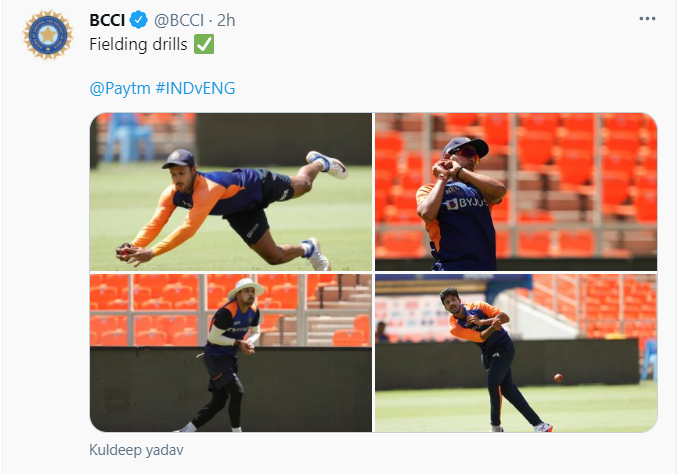 Earlier on Monday, the BCCI shared a video on Twitter to give a sneak peek of the net session. In the video, India skipper Virat Kohli and Ajinkya Rahane can be seen batting in the nets while Rohit Sharma can be seen having a chat with head coach Ravi Shastri.
In the ongoing series, Rohit, Axar Patel, and Ravichandran Ashwin have been the standout performers and now in the fourth Test, skipper Kohli would look to come to the party and end his century-drought.
Kohli had last scored a century way back in 2019 in a day-night Test against Bangladesh at the Eden Gardens.
If India manage to win or draw the final Test against England, then the side will qualify for the final of the World Test Championship (WTC) and the side would take on New Zealand in the summit clash.
India had managed to defeat England by ten wickets within two days in the pink-ball Test. The match saw both India and England batsmen failing to shine and getting out to balls that did not turn and skidded through from the spinners.
But critics have looked to blame the pitch for the failure of the batsmen. After the match, Rohit had clarified that he did not think the pitch had any demons. Even Kohli was vocal about the dreadful batting display from the two teams.
The hosts are leading the series 2-1 and the fourth Test of the series will commence on Thursday. (ANI)