Ahmedabad (Gujarat) [India], March 13 (ANI): While England and India are busy fighting it out on the field in the T20I series, former cricketers Michael Vaughan and Wasim Jaffer have been engaging in banter on Twitter after the hosts lost the opening T20I on Friday.
It all started when England restricted India to 124/7 at the Narendra Modi Stadium and former England skipper Vaughan took a dig on the hosts by rating IPL franchise Mumbai Indians as a better T20 side than the Men in Blue.
India got off to the worst possible start as the hosts lost two big wickets inside the first three overs. And while Shreyas Iyer did rescue the hosts from early blows, the Virat Kohli-led side was only able to score 124 in 20 overs.
But Jaffer hit back at Vaughan and reminded him that the visitors had fielded four overseas players. It was a veiled attack on England as some of their players were born in other countries and later migrated to UK.
“Not all teams are lucky enough to play four overseas players Michael,” Jaffer tweeted.
During the first Test between India and England way back in 2002, Vaughan had dismissed Jaffer after the opener completed his half-century. Citing the same, the former England skipper took a jibe at the Test specialist and Jaffer came back with a subtle reply.
“That’s just Life’s Amazing Memories Eh, Michael,” Jaffer tweeted. 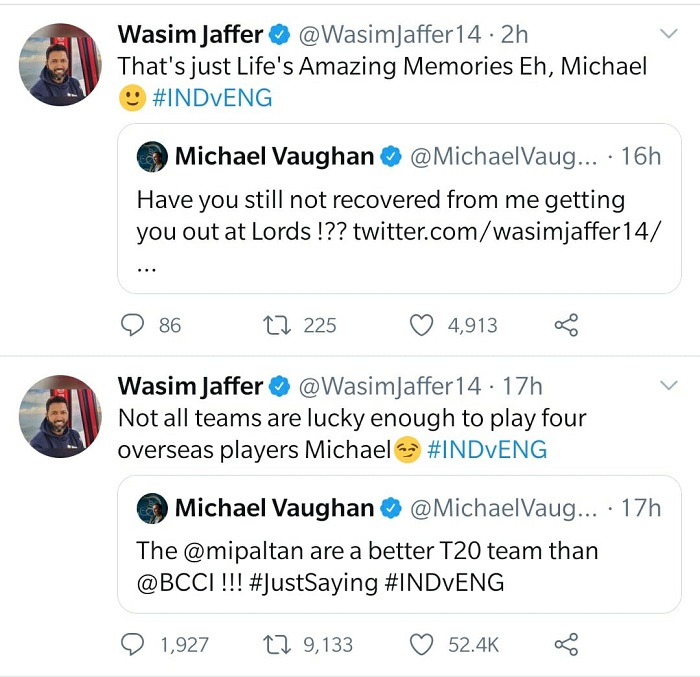 England secured a comfortable eight-wicket win over India in the first T20I. The visitors delivered an all-around performance in the match and completely outplayed their opponents.
With this victory, the Eoin Morgan-led side has gained a 1-0 lead in the five-match series.
Chasing a target of 125 runs, England witnessed a brilliant start with both openers, Jos Buttler and Jason Roy, scoring regular boundaries. The duo played brilliantly and did not miss any opportunity to punish lose balls.
India and England will now lock horns in the second T20I of the five-match series on Sunday. (ANI)