Chennai (Tamil Nadu) [India], April 1 (ANI): Royal Challengers Bangalore skipper Virat Kohli on Thursday joined the team bubble in Chennai ahead of the upcoming Indian Premier League (IPL).
Taking to Twitter, RCB posted a picture of Kohli and wrote, “If you thought we were done breaking the internet for the day, think again! Captain Virat Kohli has arrived in Chennai.” 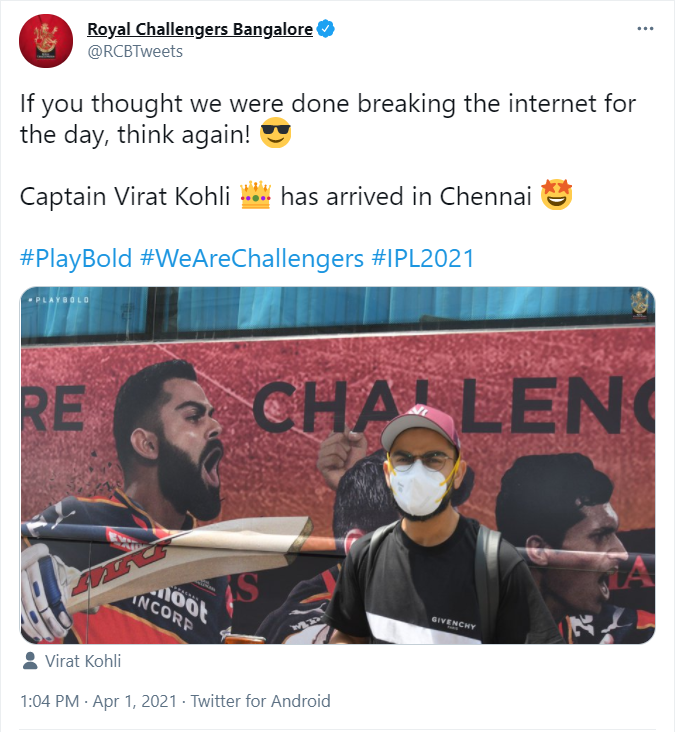 Earlier in the day, star batsman AB de Villiers joined the team bubble. RCB posted a photo of de Villiers on Twitter and the franchise captioned the post as: “BREAKING THE INTERNET. The spaceship has landed! AB de Villiers has joined the RCB bubble in Chennai.”
Earlier, sources in the know of development had confirmed to ANI that Kohli left the Pune bubble created for the ODI series against England on Monday, and as a result, upon his arrival in Chennai, Kohli will undergo quarantine for seven days as per BCCI’s standard operating procedures (SOPs) for the IPL amid the COVID-19 outbreak.
“Kohli will be joining RCB’s camp on April 1 in Chennai, then he will undergo quarantine for seven days,” the source had confirmed to ANI.
As per BCCI’s SOPs for IPL 2021, all players (except for those from the India-England series), support staff, and management entering the bubble need to undergo a seven-day quarantine in their hotel rooms. Every individual will be tested multiple times during this period, and upon returning the negative results, they will be allowed to come out of their rooms and commence outdoor training and practice sessions.
RCB is set to play the IPL 2021 opener against Mumbai Indians on April 9 in Chennai. (ANI)