ENG vs IND: Ben Stokes said before the game that we are going to chase: Joe Root

New Delhi [India], March 12 (ANI): Ahead of the 14th edition of the Indian Premier League (IPL), Chennai Super Kings (CSK) skipper MS Dhoni has started his preparations for the thrilling season beginning from April 9.
On Thursday, CSK posted a video on Twitter in which Dhoni can be seen hammering the ball out of the park during the net session. 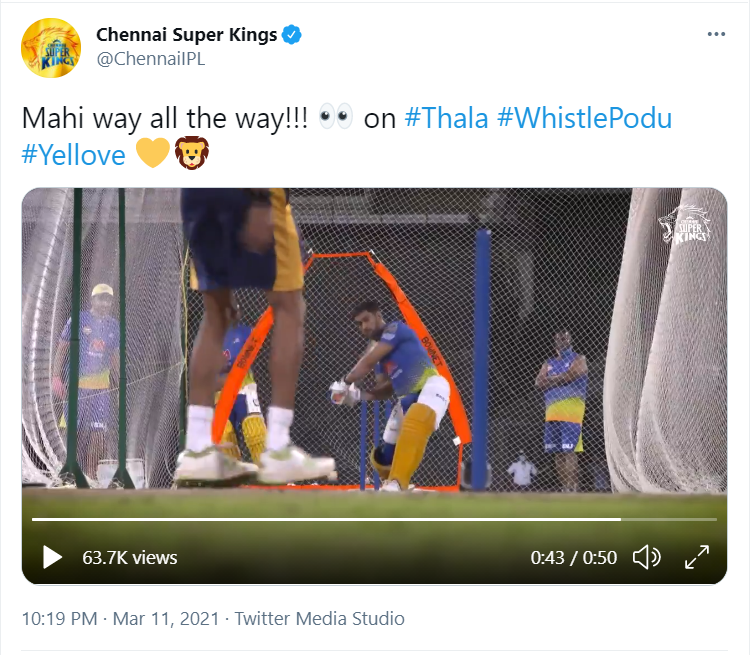 Earlier, CSK CEO Kasi Viswanathan told ANI that the team is looking to start the camp for the upcoming season of the IPL by 8th or 9th of March.
“We are looking to start our camp from the 8th or 9th as we look to prepare for the upcoming edition of the IPL. Skipper MS Dhoni is here and the likes of Ambati Rayudu and all those available will be a part of the camp. We are also looking at the Tamil Nadu boys who are part of the team to join in,” he had said.

The Chennai-based side will start their season against runners-up Delhi Capitals at Wankhede Stadium in Mumbai on April 10.
Before the mini-auction, Dhoni-led CSK had released Harbhajan Singh, Kedar Jadhav, Murali Vijay and Piyush Chawla from the squad. Shane Watson who had retired after the IPL 2020 season will also not be seen in action. Apart from the Aussie all-rounder, no other foreign player was released from the squad.
In the players’ auction held on February 18, Chennai bought the likes of Moeen Ali and K Gowtham. The side also added Cheteshwar Pujara to their ranks for the upcoming IPL 2021.
CSK retained players: MS Dhoni, Ruturaj Gaikwad, Suresh Raina, Sam Curran, Josh Hazlewood, Imran Tahir, Faf du Plessis, Dwayne Bravo, Shardul Thakur, Deepak Chahar, Karn Sharma, Ambati Rayudu, Mitchell Santner, Ravindra Jadeja, Narayan Jagadeesan, KM Asif, Lungi Ngidi, Sai Kishore.
The Chennai-based franchise had a dismal outing in last year’s IPL. The side finished at the seventh position in the points table.
Suresh Raina had missed the IPL 2020 season after pulling out of the tournament due to personal reasons. CSK has won the IPL thrice and it is regarded as one of the most successful franchises in T20 history. (ANI)