Mumbai (Maharashtra) [India], April 1 (ANI): Ahead of the upcoming Indian Premier League (IPL), Chennai Super Kings (CSK) star players MS Dhoni and Suresh Raina were seen fine-tuning their skills in a practice-session held on Wednesday.
On Thursday, CSK posted a video on Twitter in which Dhoni and Raina can be seen going through various drills and the duo also had a hit with the bat in the middle.
When Sam Curran came out for a batting session, Raina and Dhoni were keenly watching from the back and the duo also shared a laugh.
“07:03 Anbu Moments,” CSK wrote as the caption. 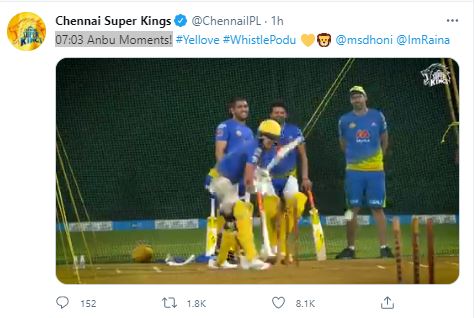 Raina had missed IPL 2020 due to personal reasons, but he is back this year to lend more solidarity to the batting lineup.
On Wednesday, Moeen Ali had said that CSK has a calm tone to it and he also said that every player in the world wants to play under the leadership of MS Dhoni. Moeen Ali was bought by CSK for INR 7 crore in the players’ auction held in February 2021.
“I think what differentiates CSK from other teams is actually how they structure everything… from the squad they have to the way they do things. They look a very calm franchise that doesn’t panic,” the official website of CSK quoted Moeen as saying.
“I’ve spoken to players who have played under MS and they tell me how he improves their game. I believe a great captain does that. I think it’s something on every player’s wish list to play under MS. I think it’s the confidence and the clarity he gives people. It’s exciting,” he added.
IPL 2021 is slated to commence on April 9 with Mumbai Indians and Royal Challengers Bangalore (RCB) locking horns in the tournament opener. CSK will play its first match on April 10 against Rishabh Pant-led Delhi Capitals at the Wankhede Stadium in Mumbai.
Dhoni has led CSK to IPL title thrice (2010, 2011, and 2018). The franchise had finished at the seventh spot last season and it was the first time, that the side failed to qualify for the playoffs. (ANI)