ENG vs IND: Ben Stokes said before the game that we are going to chase: Joe Root

New Delhi [India], April 6 (ANI): Jofra Archer might be an aggressive bowler on the field but the England pacer won hearts with his calm and composed reply to Bangladesh author Taslima Nasreen on Tuesday.
Taslima had said that England all-rounder Moeen Ali would have joined the global terrorist group ISIS (Islamic State of Iraq and Syria) if he wasn’t playing cricket.
“If Moeen Ali were not stuck with cricket, he would have gone to Syria to join ISIS,” Taslima tweeted.
Archer, who has 96 international wickets under his belt, did not take it lightly and wrote: “Are you okay ? I don’t think you’re okay.”
The Bangladesh author tried to calm things down and later claimed that her tweet on Moeen was “sarcastic” in nature.
“Haters know very well that my Moeen Ali tweet was sarcastic. But they made that an issue to humiliate me because I try to secularize Muslim society & I oppose Islamic fanaticism. One of the greatest tragedies of humankind is pro-women leftists support anti-women Islamists,” she wrote.
But Archer urged her to delete the tweet as it was in no way funny or “sarcastic”.
“Sarcastic ? No one is laughing , not even yourself , the least you can do is delete the tweet,” Archer tweeted. 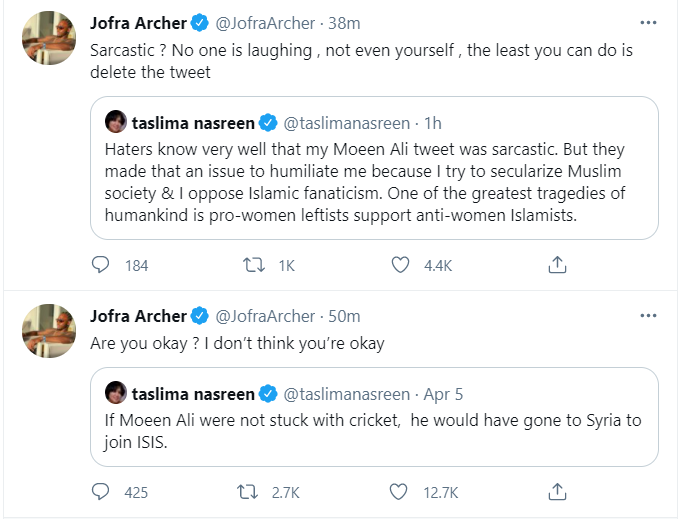 Former England pacer Ryan Sidebottom floated an idea of deleting Taslima’s Twitter account. “I think you might need to check if you’re feeling ok !!! Maybe delete your account too,” Sidebottom tweeted.
Moeen is one of the key players in England’s white-ball setup. The World Cup-winning all-rounder will now be seen in action for Chennai Super Kings (CSK) in the upcoming IPL.
Last week, Moeen had said that every player in the world wants to play under the leadership of CSK skipper MS Dhoni.
Moeen was bought by CSK for INR 7 crore in the players’ auction held in February 2021.
“I think what differentiates CSK from other teams is actually how they structure everything… from the squad they have to the way they do things. They look a very calm franchise that doesn’t panic,” the official website of CSK quoted Moeen as saying.
“I’ve spoken to players who have played under MS and they tell me how he improves their game. I believe a great captain does that. I think it’s something on every player’s wish list to play under MS. I think it’s the confidence and the clarity he gives people. It’s exciting,” he added.
Meanwhile, despite witnessing a dismal run in the last season, CSK will still enter the 2021 edition of the IPL as one of the favourites, given the franchise’s track record on Indian soil. Not to forget the experience the side has at its disposal. (ANI)