New Delhi [India], April 2 (ANI): Former India batsman Virender Sehwag on Friday went down the memory lane and recalled the 2011 World Cup victory and said it is still the “moment of a lifetime” for him.

Taking to Twitter, Sehwag wrote, “April 2: 10 years ago, the moment of a lifetime. #TeamIndia.” 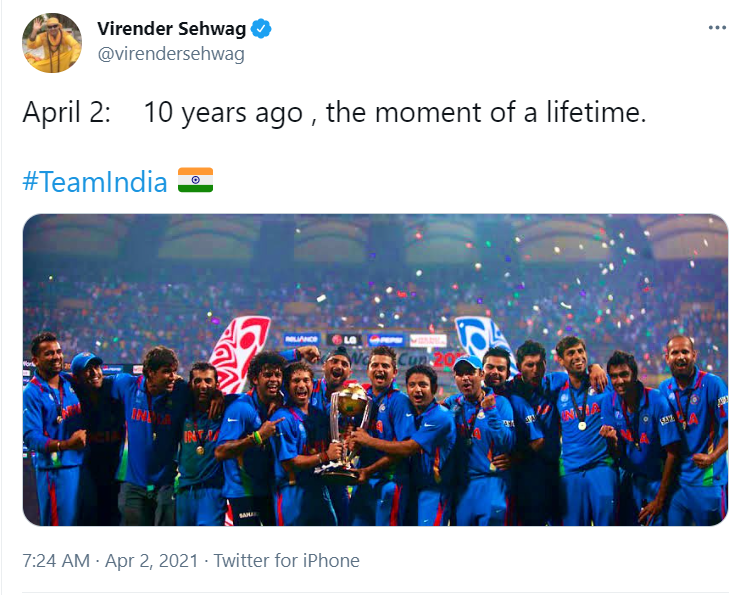 In the eight matches in the tournament, Sehwag scored 380 runs including the competition’s highest score of 175 runs which came in the World Cup opener against Bangladesh. The former opening batsman scored at an average of 47.50 in the tournament while opening with Sachin Tendulkar.

India had defeated Sri Lanka by six wickets in the summit clash played at the Wankhede Stadium in Mumbai. The Men in Blue chased down the 274-run target, riding on brilliant innings of 97 and 91* from Gautam Gambhir and skipper MS Dhoni.

While Dhoni was adjudged as the Man of the Match, stylish all-rounder Yuvraj Singh was named the Player of the Tournament. As soon as the ball left Dhoni’s bat, India went into ecstasy.

The entire country was soon on the streets after the iconic win, singing the national anthem while waving the tri-colour. (ANI)