Islamabad [Pakistan], October 28 (ANI): After Zimbabwe President made a scathing attack on Pakistan in his cryptic congratulatory tweet for his country’s win in T20 World Cup, Pakistan Prime Minister Shehbaz Sharif has responded with a subtle dig.
Shehbaz Sharif responded to Zimbabwe President’s tweet and wrote, “We may not have the real Mr Bean, but we have real cricketing spirit .. and we Pakistanis have a funny habit of bouncing back:) Mr President: Congratulations. Your team played really well today,” accompanied by a clap emoticon. 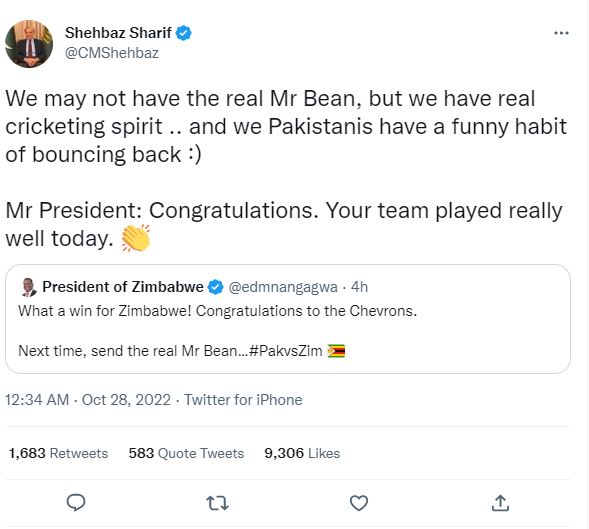 Zimbabwe President Emmerson Dambudzo Mnangagwa, on Thursday, congratulated the cricket team after their win against Pakistan, however, he raised many eyebrows with his witty statement that he directed towards Pakistan. He wrote, “What a win for Zimbabwe! Congratulations to the Chevrons. Next time, send the real Mr Bean…#PakvsZim” 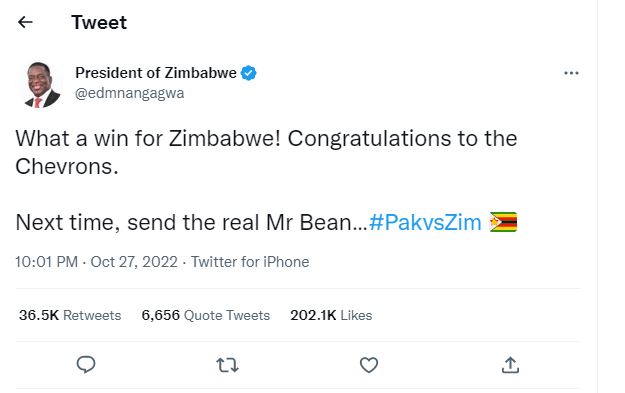 President Emmerson took a jibe at Pakistan’s comedian Asif Muhammad, a doppelganger of Mr Bean who had travelled to Zimbabwe in 2016 posing as the actual Mr Bean, who actor Rowan Atkinson originally plays.
Pakistan Cricket Board uploaded a post on its official Twitter account of the team’s players’ practising before the Zimbabwe match, to which a Twitter user, named Ngugi Chasura responded by saying, “As Zimbabweans, we won’t forgive you…you once gave us that Fraud Pak Bean instead of Mr Bean Rowan ..we will settle the matter tomorrow just pray the rains will save you…#ZIMVSPAK.”
Now, Shehbaz Sharif’s response is being hailed by Pakistan cricket fans who are calling it a “Sixer!!!”
Talking about the match, Pakistan’s over-reliance on their opening batting pair came back to haunt them as Zimbabwe pipped them in a low-scoring thriller by one run to clinch their first Super-12 win of the ongoing T20 World Cup on Thursday at the Perth Stadium.
Pakistan made a mess of a paltry chase as they suffered a batting collapse and left their bowlers to chase and win the match for them. All-rounder Sikandar Raza took three wickets in a short span to dismantle the chase.
Earlier, Pakistani bowlers unleashed hell upon the batting lineup of Zimbabwe to trigger a batting collapse, restricting them to just 130/8.
Pakistan’s decision to play an extra pacer in Mohammad Wasim Jr worked wonders for the team as the youngster ended with his best T20I bowling figures (4/24) to restrict Zimbabwe to a below-par total. Sean Williams and Brad Evans helped the team cross the 100-run mark.
Sikandar Raza was declared the ‘Player of the Match’ for his brilliant bowling performance. (ANI)