New Delhi [India], April 2 (ANI): Five days after testing positive for COVID-19, legendary India batsman Sachin Tendulkar has been hospitalised for “abundant precaution under medical advice”.
Last Saturday, Tendulkar had informed that he tested positive for coronavirus and added that all other members at his home have returned a negative COVID result.
On Friday, he tweeted: “Thank you for your wishes and prayers. As a matter of abundant precaution under medical advice, I have been hospitalised. I hope to be back home in a few days. Take care and stay safe everyone.”
Apart from Tendulkar, S Badrinath, Yusuf Pathan and Irfan Pathan also tested positive for the Covid-19 last week. All of them shared the dressing room for India Legends in the Road Safety World Series played in Raipur with fans’ presence inside the stadium.
The 47-year-old also wished the countrymen and teammates on the 10th anniversary of India’s 2011 World Cup triumph.
“Wishing all Indians & my teammates on the 10th anniversary of our World Cup win,” he added. 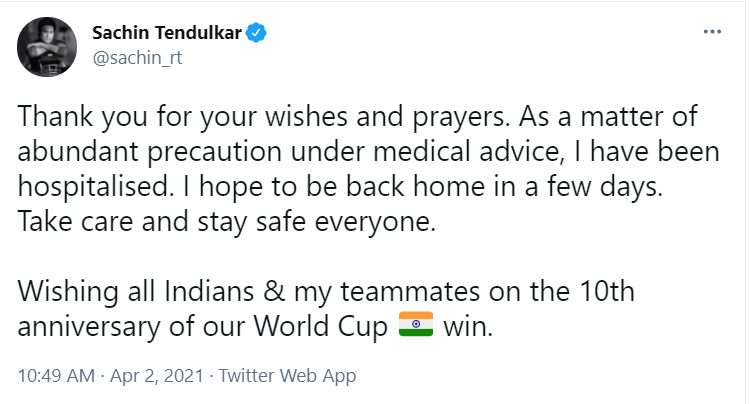 Tendulkar was the first male cricketer to score the double century in ODI cricket, when he hit an unbeaten 200 against South Africa in February 2010. In ODI rankings, he was on top for a total of 112 matches or 354 days. He is also the youngest to top the ODI batting rankings – at 8,346 days old in February 1996.
Tendulkar, who retired from international cricket in 2013, scored 15,921 and 18,426 runs respectively in 200 Tests and 463 ODIs he played for India. He holds the record for scoring the maximum number of centuries (100) in international cricket. (ANI)