New Delhi [India], April 2 (ANI): Former India all-rounder and Player of the Tournament of the 2011 World Cup Yuvraj Singh on Friday said that winning the World Cup is eternal and nothing can replace it in his cricketing playing career.
Yuvraj shared a montage of 2011 World Cup memories and his thoughts on the title-winning journey in a Twitter video.
In the World Cup, Yuvraj scored 362 runs and took 15 wickets. After the tournament, Yuvraj was diagnosed with cancer and it was revealed that the southpaw had played the tournament in immense pain.
“It is 10 years now when we won the last World Cup. Time has gone by so quickly. The whole team wanted to win the World Cup so badly especially for Sachin because we knew that it was his last WC so wanted to win the title in India which was never done before. It was really special for us, I can’t put it in words because those emotions can’t be expressed. There were a couple of great individual performances especially from MS Dhoni and Gautam Gambhir in the finals. Gambhir throughout the tournament. Virender Sehwag some great opening partnerships with Sachin. Sachin, obviously, great throughout the whole journey in the World Cup. I think Zak (Zaheer Khan) took us 20 wickets and always got us breakthroughs. I also performed a bit in the WC,” Yuvraj said in a video shared on his official Twitter handle.
“Winning a World Cup is a very special memory for any cricketer especially when you think at a young age that you want to play for India and then winning the World Cup is eternal, can’t be bigger than that. Very emotional and a great day for us, 10 years of our anniversary. Obviously, I wanted to do this video with Sachin, Viru, Bhajji and with all my teammates but unfortunately Sachin, Yusuf and Irfan everybody got tested positive for Covid-19. I wish them a great recovery soon. It was a great victory for us and a great memory and I don’t think in my cricketing career anything can replace that. Hopefully, you all will remember that great day and I appreciate what we together achieve for our country. Live the memory forever, lots of love guys,” the all-rounder added. 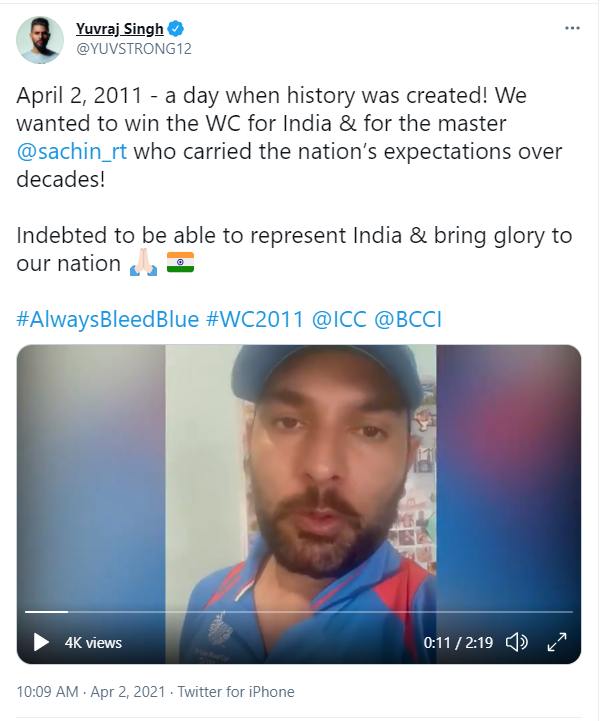 India defeated Sri Lanka by six wickets in the summit clash played at the Wankhede Stadium in Mumbai. The Men in Blue chased down the 274-run target riding on brilliant innings of 97 and 91* from Gautam Gambhir and skipper MS Dhoni respectively.

Tendulkar, known as the ‘God of Cricket’, had waited 22 years for lifting the trophy and on April 2, 2011, his dream finally came true at his home ground. India had won its first World Cup under Kapil Dev’s leadership in 1983 and they were not able to lay their hands on the coveted trophy until 2011.
Under Dhoni’s captaincy, India lost just one match in the showpiece event against South Africa. India defeated arch-rivals Pakistan in the semi-final to set up a blockbuster finale with Sri Lanka. At the final, the Wankhede looked like a sea of blue with Indian fans filling up each and every seat of the iconic stadium. The rest of the Indians were glued to their TV screens to witness the mega clash. (ANI)