New Delhi [India], March 27 (ANI): Former India all-rounder Yusuf Pathan on Saturday announced that he has tested positive for the coronavirus and has quarantined himself at home and “taking all the necessary precautions”.
Taking to Twitter Yusuf wrote, “I’ve tested positive for COVID-19 today with mild symptoms. Post the confirmation, I have quarantined myself at home and taking all the necessary precautions and medication required.”
“I would request those who came in contact with me to get themselves tested at the earliest,” he added. 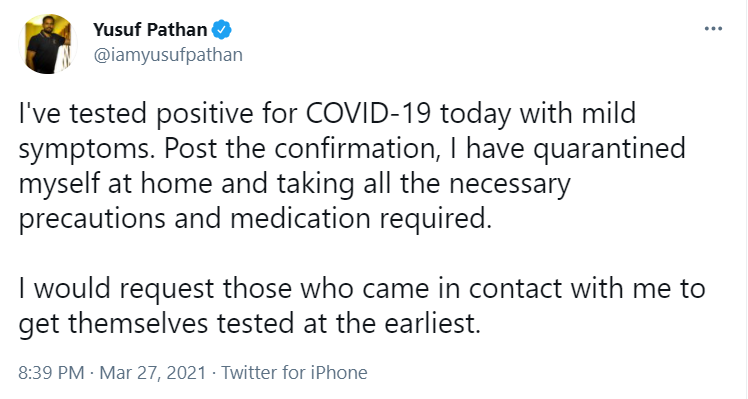 Earlier in the day, former India legendary batsman Sachin Tendulkar revealed that he tested positive for COVID-19.
Taking to social media, the Little Master informed that all other members at his home have returned a negative COVID result.”I have been testing myself and taking all the recommended precautions to ensure Covid is kept at bay. However, I’ve tested positive today following mild symptoms,” Tendulkar said in a statement on Twitter.
“All others at home have tested negative. I’ve quarantined myself at home and am following all the necessary protocols as advised by my doctors. I want to thank all the healthcare professionals who are supporting me and many others across the country. Take care all of you,” he added.
Both Sachin and Yusuf played for the same team India Legends in the recently concluded Road Safety World Series in Raipur.
Tendulkar led India Legends to title win in the first edition of the Road Safety World Series. Both Sachin and Yusuf were also part of India’s World Cup 2011 winning team.
Earlier this month, Indian football skipper Sunil Chhetri had informed that he has tested positive for COVID-19. However, he was “fine” and was in recovering mode.
Last month, Yusuf announced his retirement from all forms of cricket. The all-rounder had played the finals of the 2007 T20 World Cup against Pakistan and he had famously struck a six off Mohammad Asif in the very first over of the final.
In the finals of the 2011 World Cup, Yusuf had lifted Sachin Tendulkar on his shoulders as the hosts defeated Sri Lanka in the final at the Wankhede Stadium to lift their second 50-over World Cup title.
The 38-year-old played 57 ODIs, 22 T20Is for India, managing to score 1,046 runs across both formats. He also went on to take 46 wickets combined in both formats. He last played a game for the country on March 30, 2012, against South Africa in a T20I at Johannesburg. (ANI)